Predictions are a way for Twitch viewers to wager their hard-earned Channel Points on the outcome of a game being streamed. Streamers found this feature to be a low-friction, fun, and innovative way to engage users in their communities. The feature encompassed a multiplayer community experience engaging viewers with a sense of playful rivalry and competition. 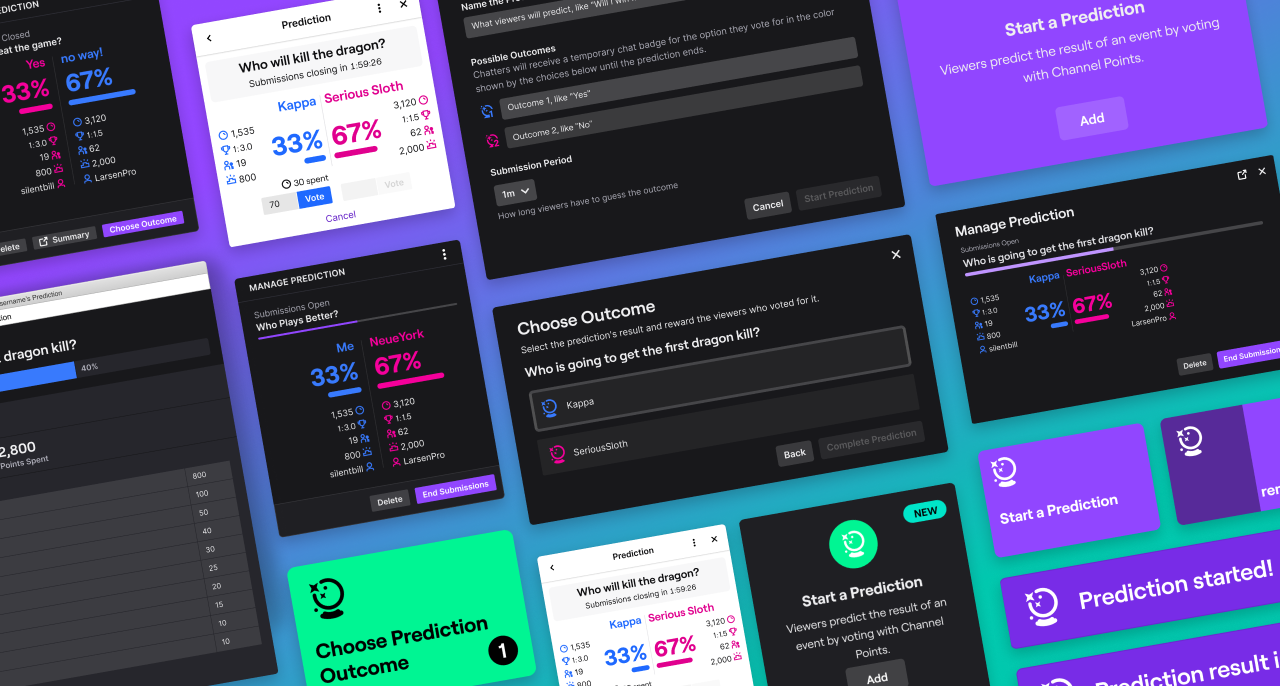 Streamers are always looking for new ways to engage their communities and to create interesting content in their streams. Streaming can be attention consuming and it was difficult for streamers to manage all the tools and tasks to facilitate conversation in chat. In addition to streamer burden, participation in highly viewed streams was extremely low. Viewers are always looking for alternative ways to feel a sense of belonging and connection beyond chat as well as a way to spend more Channel Points. Predictions was the perfect solution that offered a balance for the needs of our users. 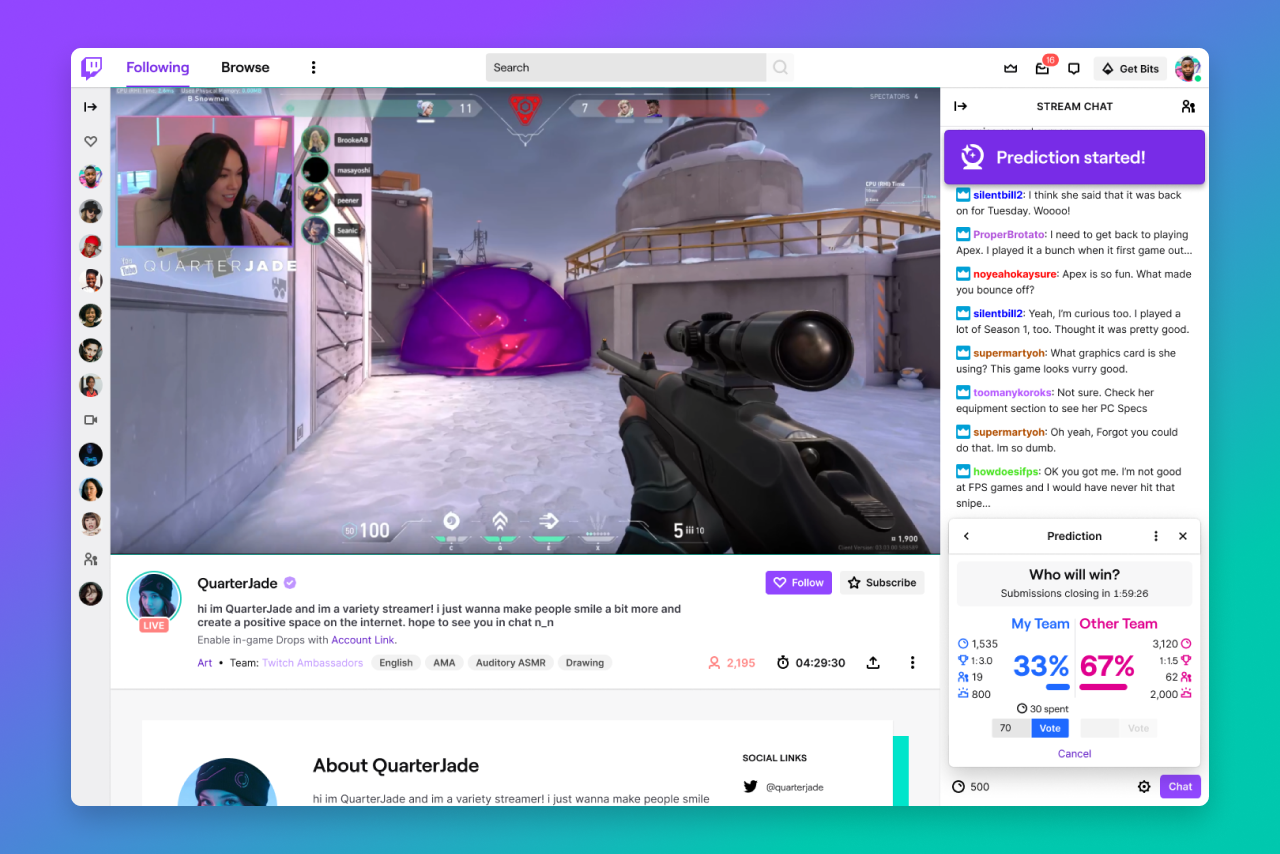 It’s no surprise that in Twitch streams with large audiences chat is overwhelming and difficult to understand. Participation in fast moving chat makes users feel lost in a void. Data had shown us that when chat had greater than 10 messages per minute, users felt a lower sense of belonging and connection. Less than half of viewers in larger streams had still not found meaningful ways to participate in a stream, and even more were less likely to participate in chat itself.

Our team set out to improve the lives of larger tier streamers and their viewers. I led brainstorm sessions with product managers, engineering, data science and other designers to gather solutions beyond standard chat participation. We imagined a stream as a “stadium” similar to a sports game. Tapping into the competitive nature of gamers, we wanted to give viewers a sense of rivalry as they compete with others in a stream. Predictions were meant to gamify the experience of watching a stream by creating a low-friction and fun way for viewers to invest their Channel Points in a stream’s content.

Predictions was a success on many levels. Feature adoption rate was very high amongst streamers and Predictions participation rate amongst viewers made it the #1 item that viewers spent Channel Points on. The streamlined process to setup predictions allowed streamers and mods alike to quickly run predictions repeatedly in a stream. Due to its popularity, streamers soon began running Prediction specific streams for their viewers to engage in playful rivalry. Viewers enjoyed an alternative way to engage with other viewers beyond chat and win more Channel Points which helped that ecosystem. Predictions led to higher viewership, hours watched, engagement, and participation rates in channels that ran them. 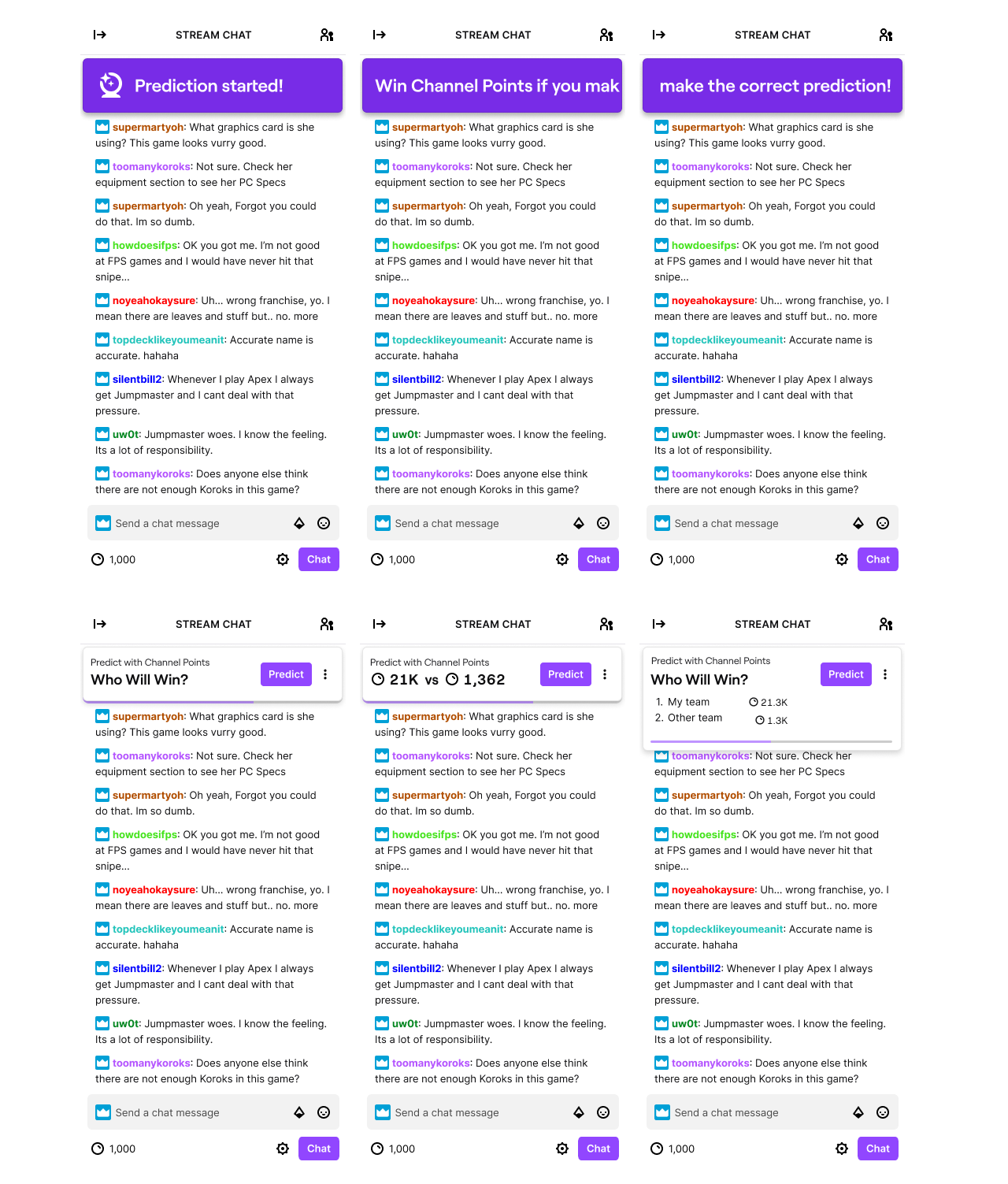 A prediction is shown in Channel Points rewards when it is running. Viewers wager their Channel Points in two ways; clicking on the wager amount or by entering a custom amount of their own. Once you’ve picked a prediction outcome, you are locked into that specific choice.

After a viewer wagers their points, the time to submit will either end or be concluded by the the streamer/moderator. During this time the viewer awaits the outcome of the prediction. If the outcome is in their favor they win Channel Points. A celebration style animation is shown and displays the amount of Channel Points they have won. 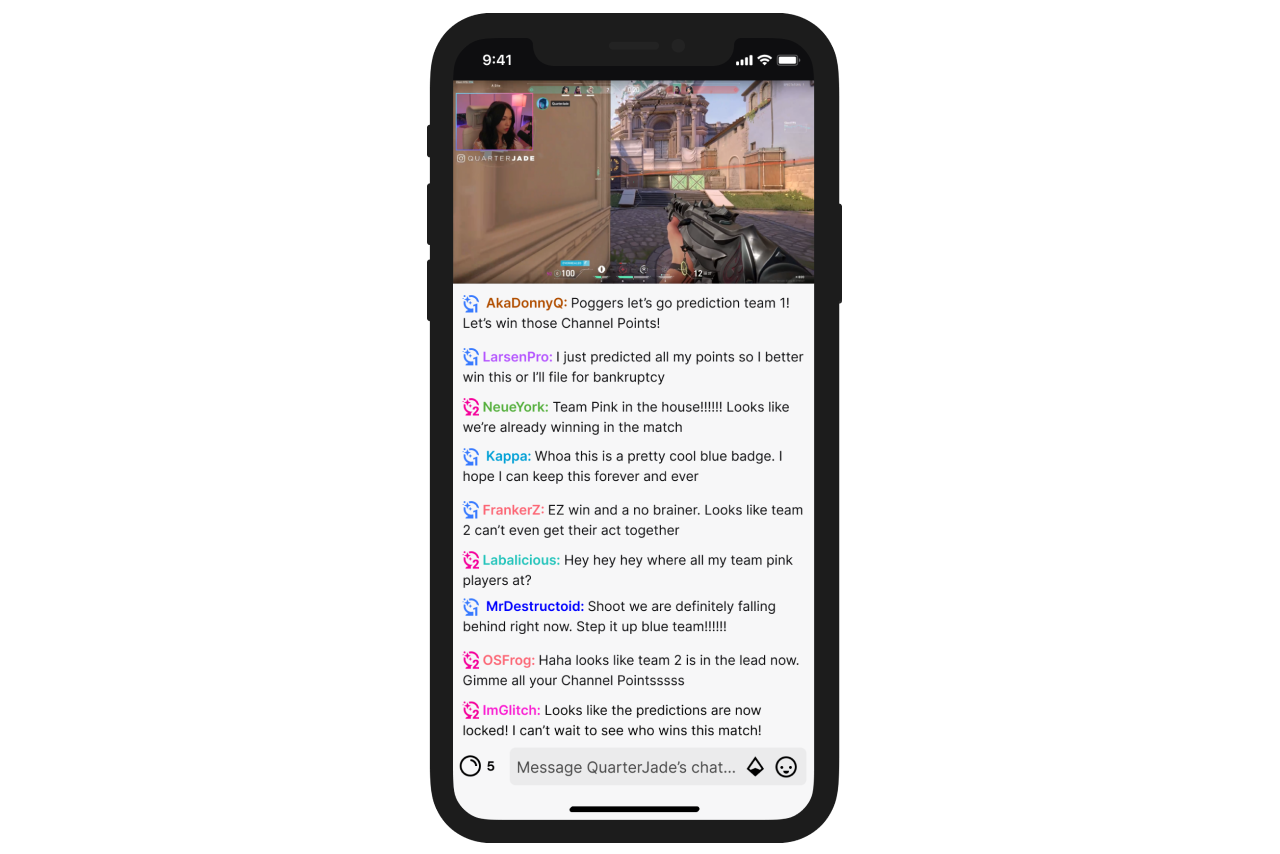 When a viewer chooses a a prediction they are automatically assigned a temporary badge that displays next to their name in chat. This badge shows what prediction choice they made and is meant to strengthen the rivalry between opposing outcomes, signal to others what choice you made for camaraderie, and create opportunities to chat in the stream.When a prediction concludes the badge resets to their original channel badge. 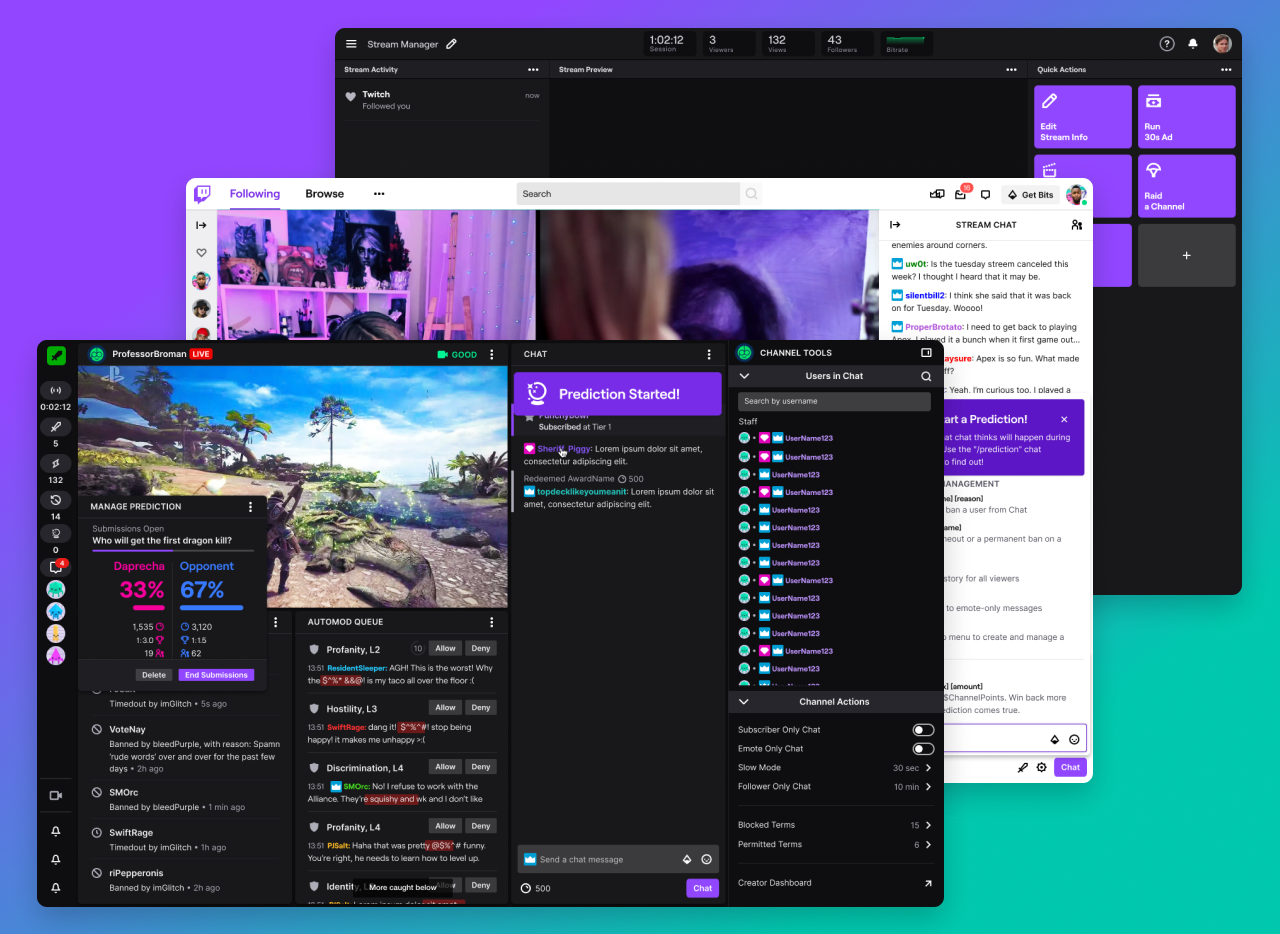 Predictions were meant to be created in a quick and frictionless way. Streamers and moderators can create a prediction in 3 different ways: from the Stream Manager, Modview or via a chat command. 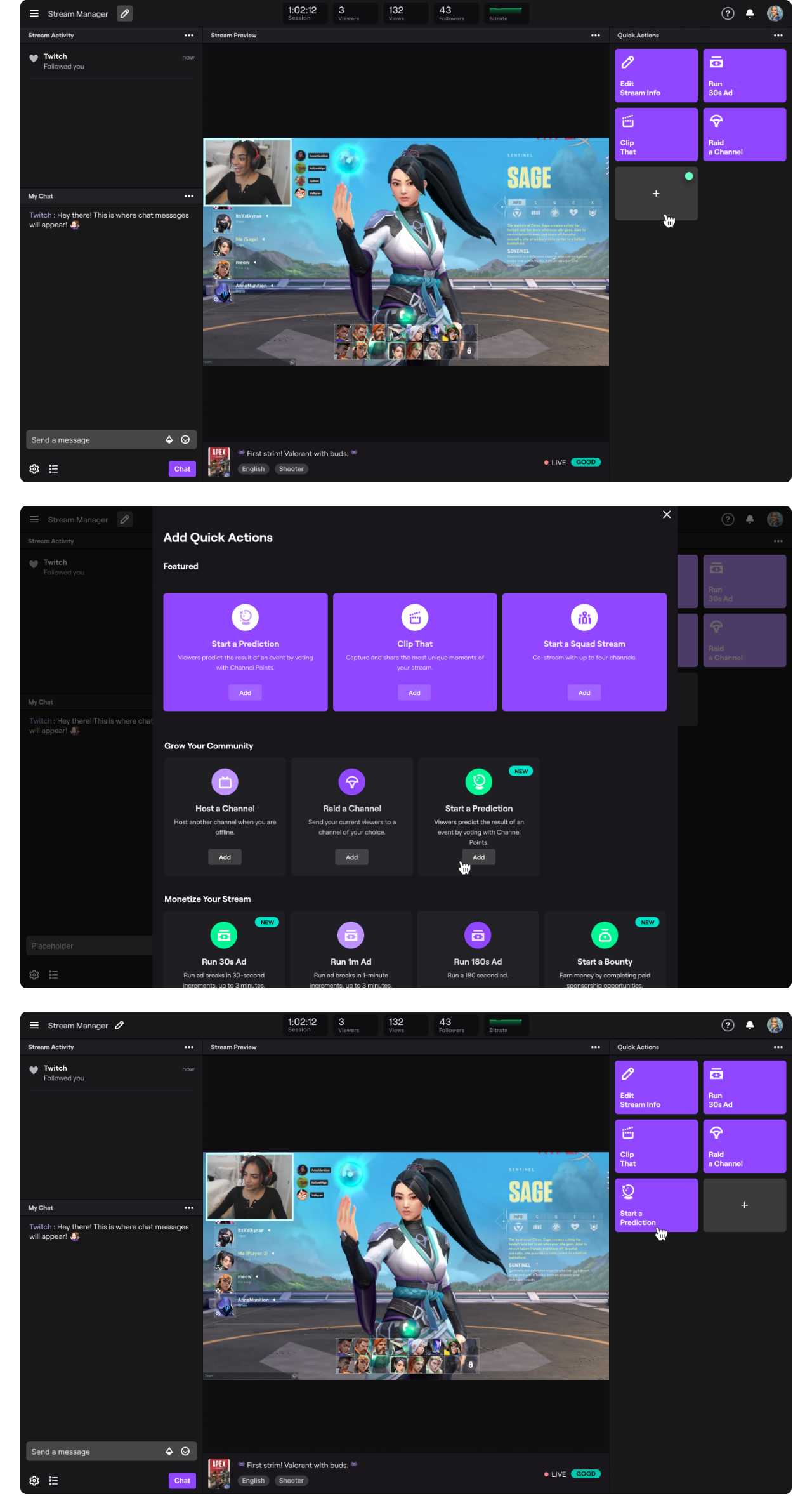 Example of how a streamer adds a quick action to their stream manager, allowing them to create and manage predictions. 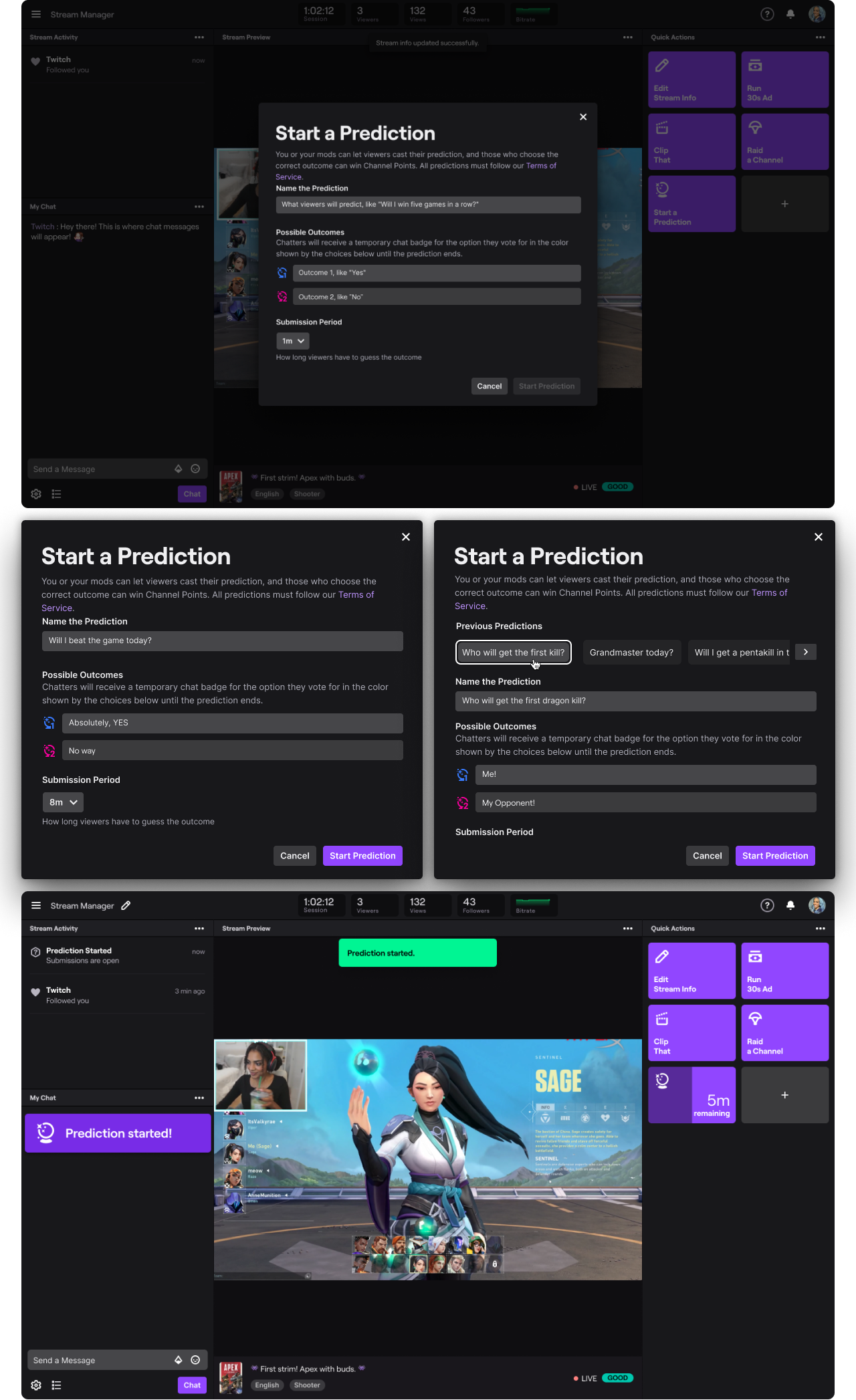 When a streamer clicks the Prediction Quick Action they are shown a modal which allows them to set various details of the prediction. A streamer fills out a title, two options and a duration for which viewers can wager their points. Once a prediction is running, they are returned to the stream manager and can monitor their predictiont there. 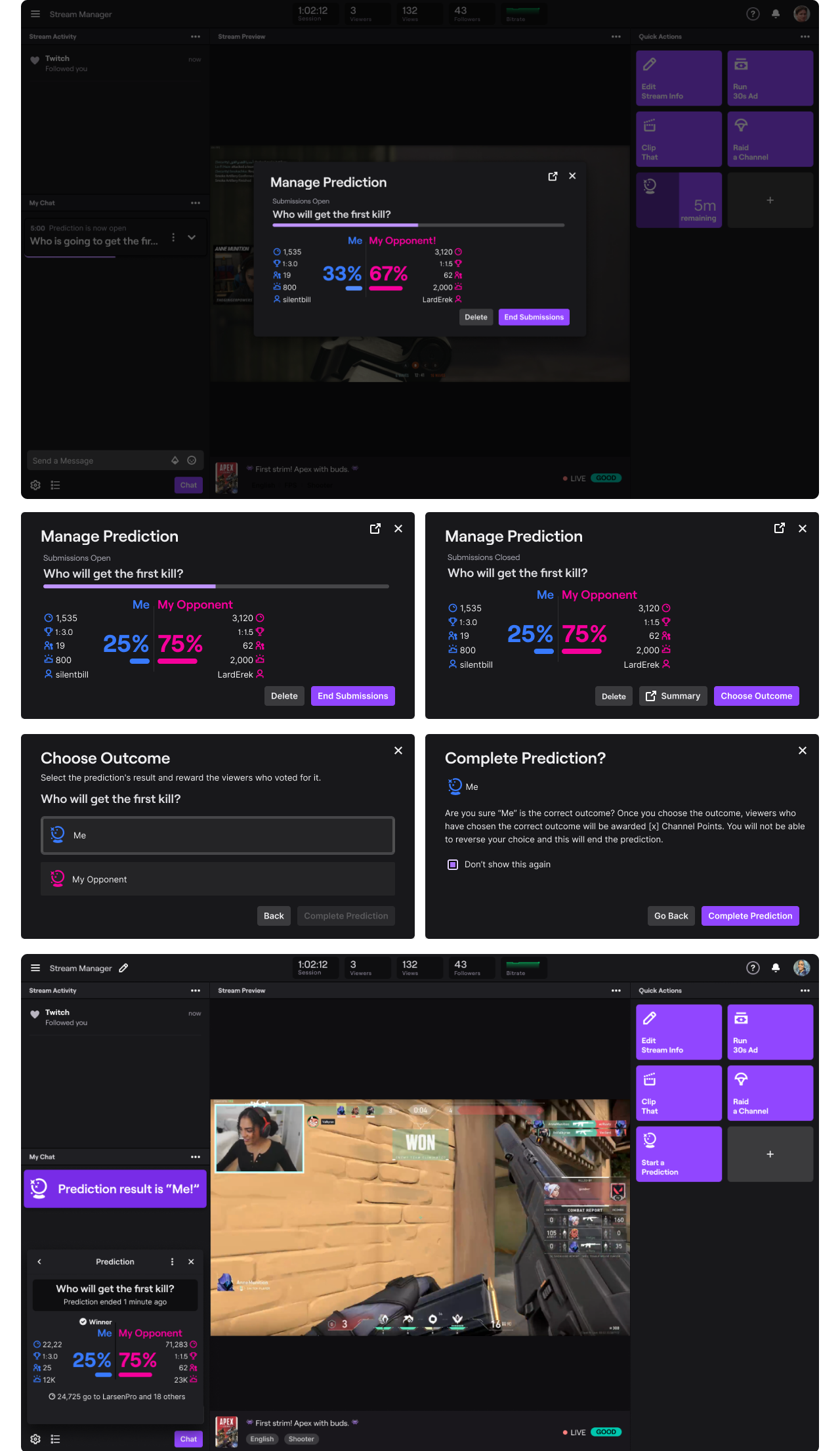 Streamers can end submission time themselves or wait for the duration to time out. When the time is up, streamers decide the outcome of the prediction. Channel Points are distributed to the winning side and subtracted from the losing side. 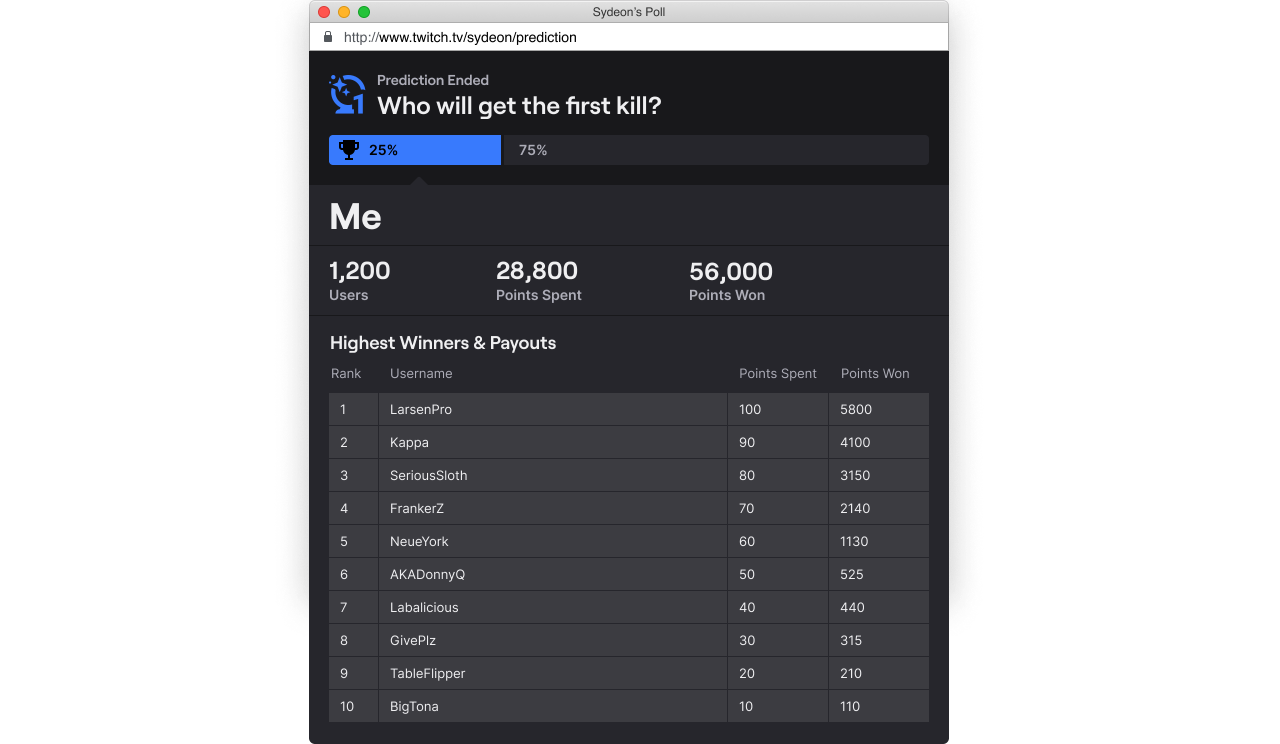 A detailed summary view is available when a prediction submission window has ended or if a prediction concludes. This view is opened as a new window separate from the stream manager as to not disrupt the workflow of a streamer. Streamers can view a detailed list of the prediction to create talking points or to find more granular details of the prediction. 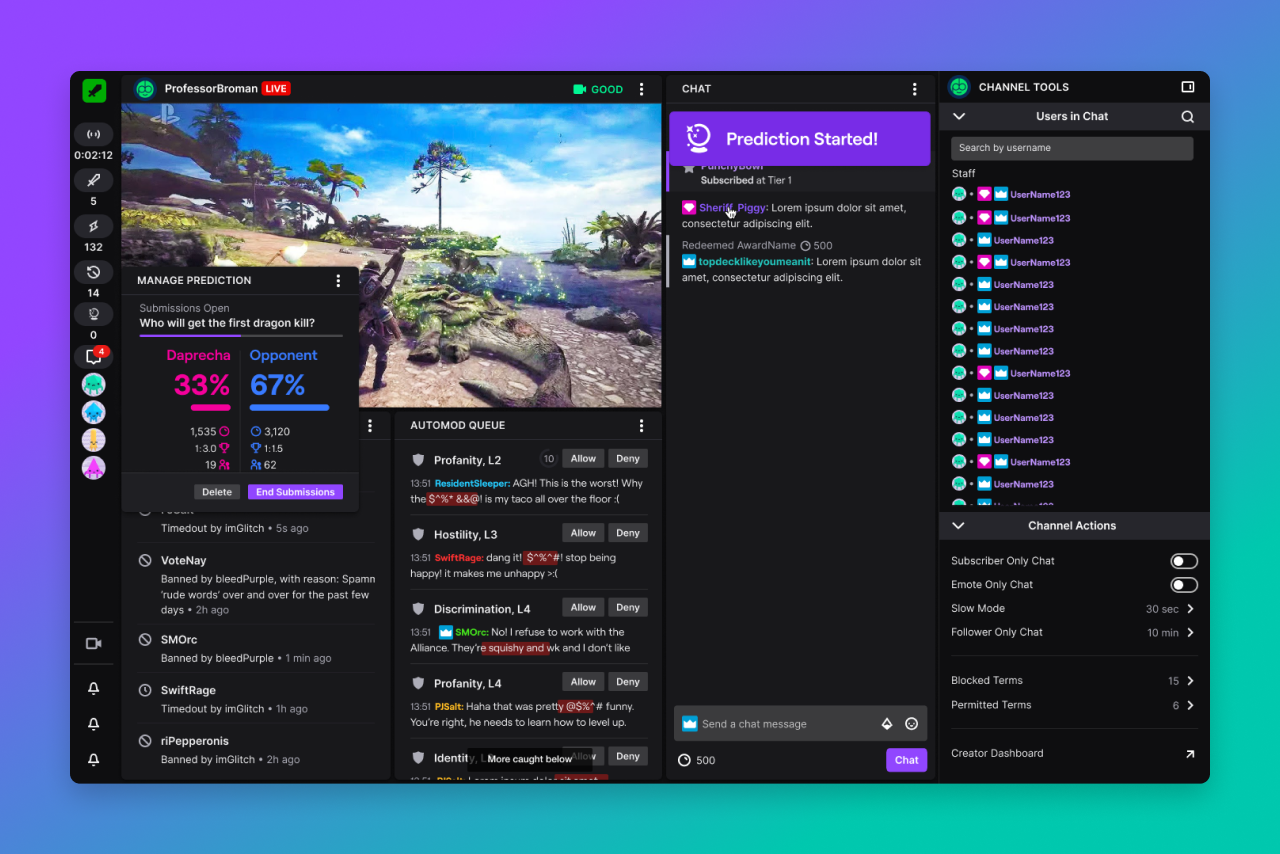 UX research and user feedback had shown us that streamers were burdened with all the tasks of running a stream. To remedy this, we allowed moderators of the streamer’s channel to create predictions. This proved to be an effective way to reduce streamer burden as well as expand the role of a moderator on a channel. Here is an example of the "docked panel" view that moderators would see if they wanted to run and manage a prediction in moderator view.

The same steps to create a prediction are mirrored in the moderator view in these docked panels. With larger channels, streamers appreciated the ability for moderators to run predictions as they played a game, while moderators serving a larger role for their community. 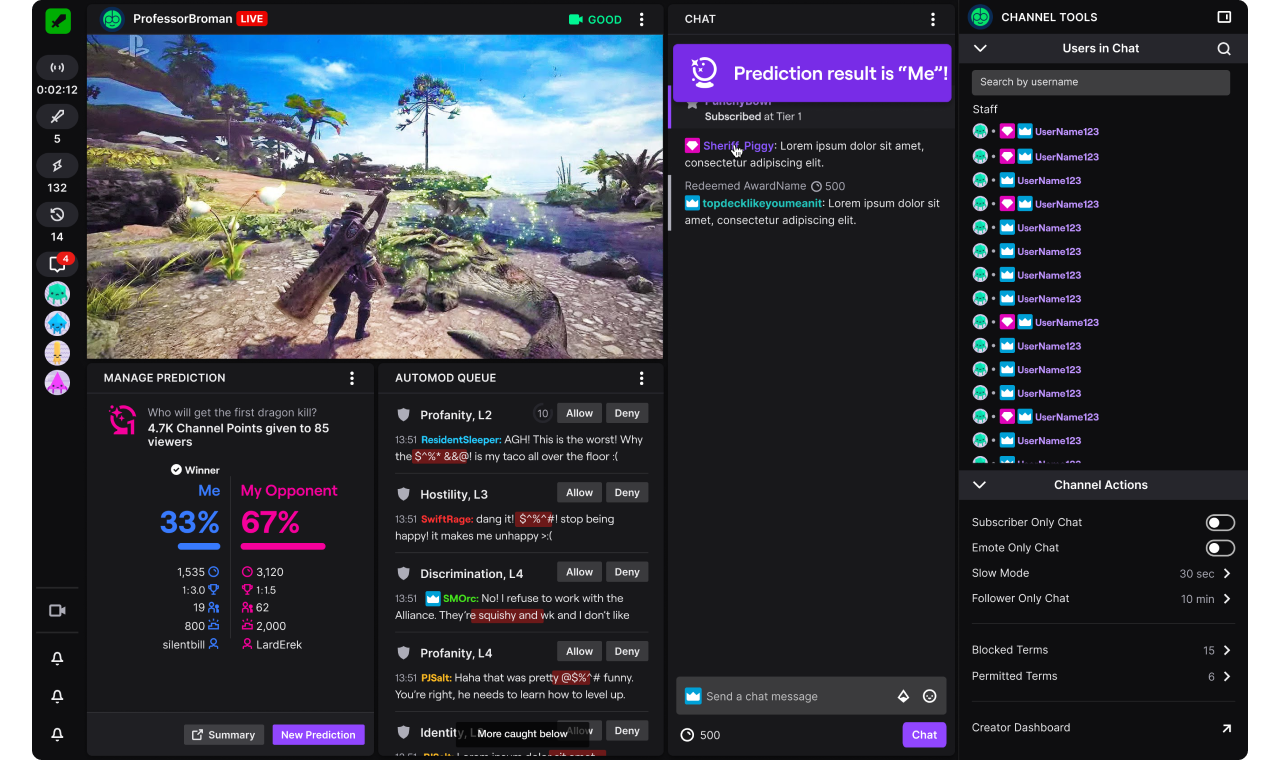 Moderators can also "undock" a panel and drag it to the main canvas to monitor or run a prediction. This view was helpful in managing a prediction and allowed a real-time view of a running prediction. 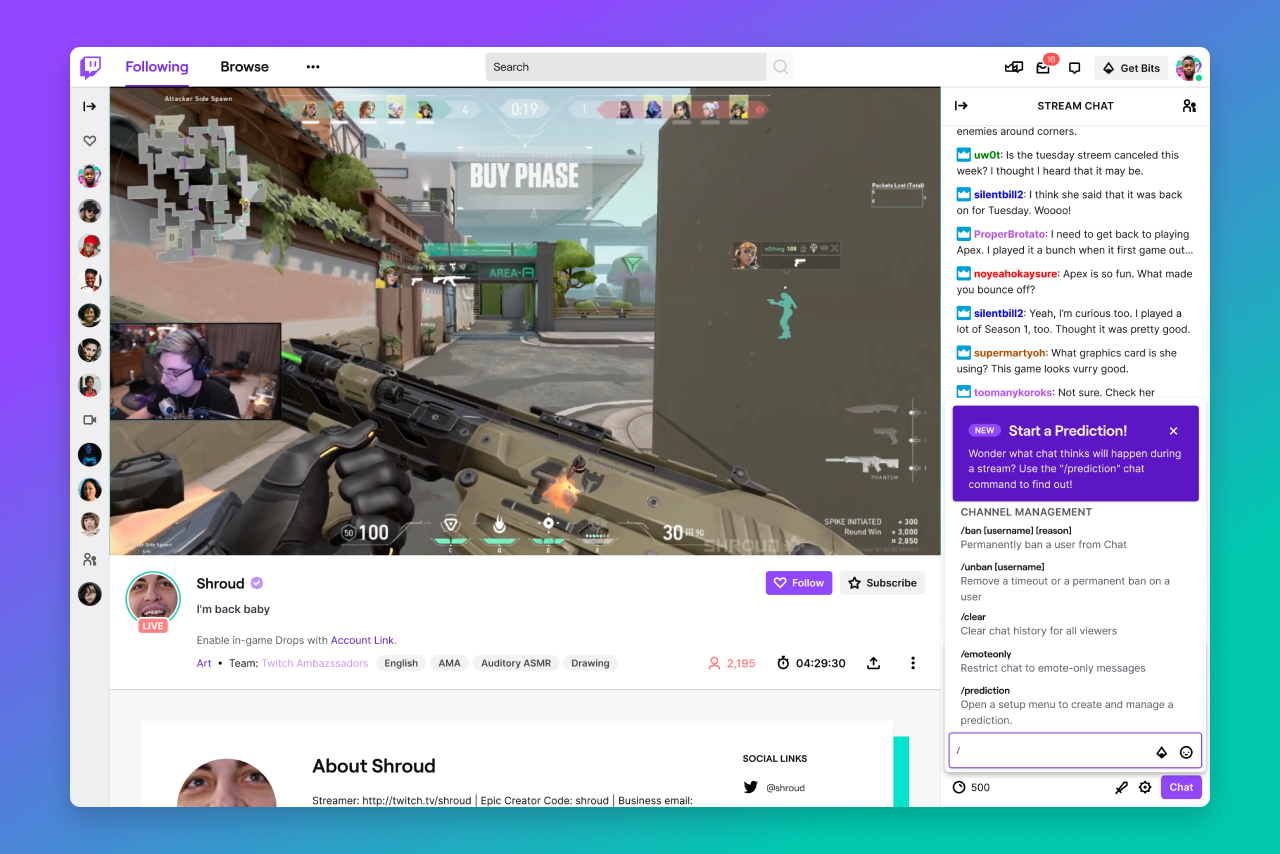 The chat command is the third way to create a prediction and it offered a quick way to access the prediction creation modal outside of the stream manager or the mod view. Streamers and mods enjoyed this feature as it offered a "shortcut" into creation and manage flow for predictions.