Community Challenges are a way for Twitch viewers to pool their Channel Points with others in the community to unlock a range of special experiences. Streamers set up high priced challenges that allow their community to come together and crowdfund a reward. Community Challenges became another way to encourage engagement and participation in Twitch channels. 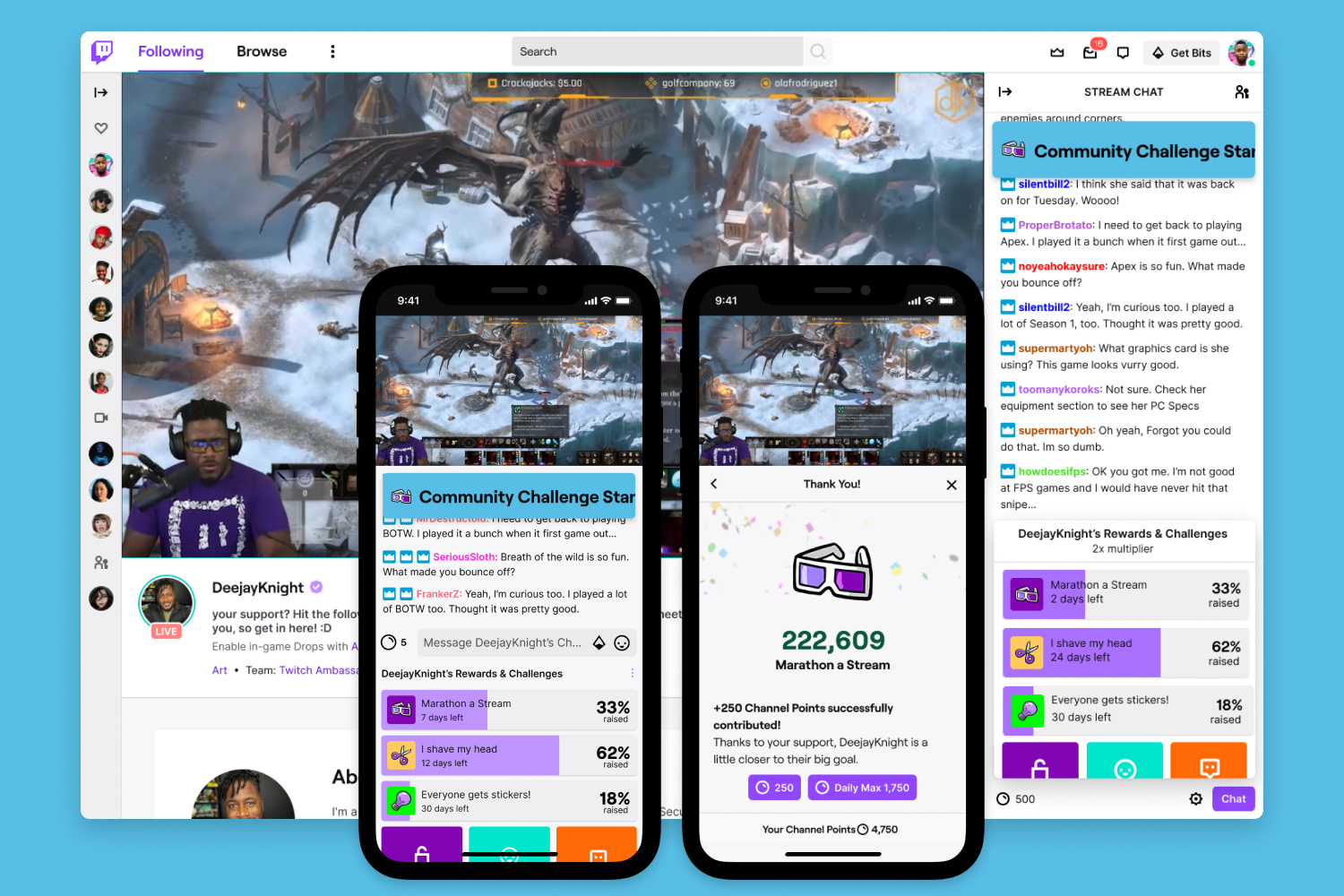 With the successful launch of Channel Points (a product that allows viewers to watch a stream and earn points and in turn redeem streamer rewards), data had shown us that viewers on Twitch were accumulating points at a faster rate than they were spending them. Our team brainstormed for possible solutions to this imbalance and the creation of additional “burn” opportunities for Channel Points, particularly for viewers with high points balances. Community Challenges was one such idea we felt would strongly benefit streamers and viewers.

With Community Challenges, Twitch viewers would be able to pool their Channel Points with others in the community to unlock a range of special experiences, such as unlocking a 24 hour stream, getting a streamer to play a special game, and more. This special type of custom reward was intended to deepen engagement, strengthen community bonds, and create spectacle on stream.

The goal was to create a product with a twofold benefit: more spending participation in the Channel Points economy, and a stronger sense of bonding between viewers and their communities.

Data had shown us that Twitch Channel Points users were holding onto points more than spending them. We also surveyed our users and found that many Channel Points rewards felt like solitary experiences that only benefited individuals. We studied international  livestreaming competitors and found they had weekly or daily “missions” which were crowdfunded goals that, if completed, pushed streamers to a front page of the website.

Taking inspiration from these sites, we targeted Channel Points users with high balances who were looking for new ways to spend points. By allowing users to pool their points together and unlock weekly and monthly challenges we created a product with a twofold benefit: more spending participation in the Channel Points economy, and a stronger sense of bonding between viewers and their communities.‍

Community Challenges became a new way for viewers to spend Channel Points, influence stream content, and feel connected to a channel’s community. When a Streamer ran a challenge and a Channel Points user was exposed to it, they could expect roughly a ~50% participation in it. On average, challenges usually ran about 22 days with users contributing points on a repeated daily/weekly basis. This repeated engagement incentivized viewers to earn and burn more points in the Channel Points system and offered a unique opportunity for viewers to influence a streamer’s content. The success of this product also led to a partnership with our Ads team to create “Community Boosts” which followed the same crowdfunding mechanism as Community Challenges. Boosts allowed viewers to push their favorite streamer to the front page of Twitch. 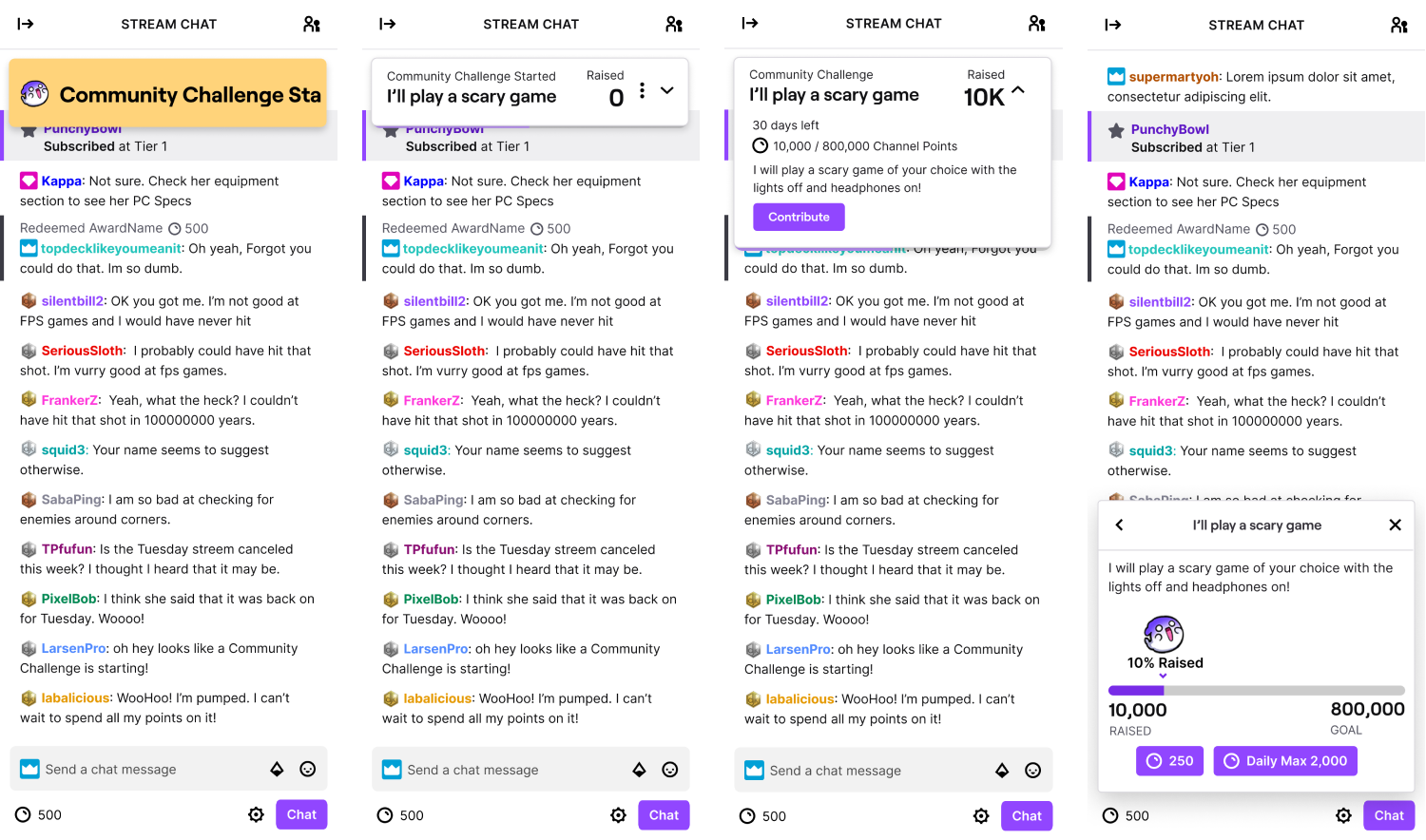 There are two ways to participate in a Community Challenge: Through the top of Chat & through the Channel Points popover.

Examples of various states of the top of chat callout which can be customized with color, iconography and description based on the preferences of the streamer.

Viewers open a steamer’s Channel Points popover and are shown challenges on the top of rewards. Clicking into the challenge will bring them to a more detailed view where they choose between two ways to participate; spending the minimum or max amount of points. Either one will show an animation of their contribution toward the total challenge amount.

When a Community Challenge has ended it updates in the Channel Points popover. Here you can see the success and fail states. 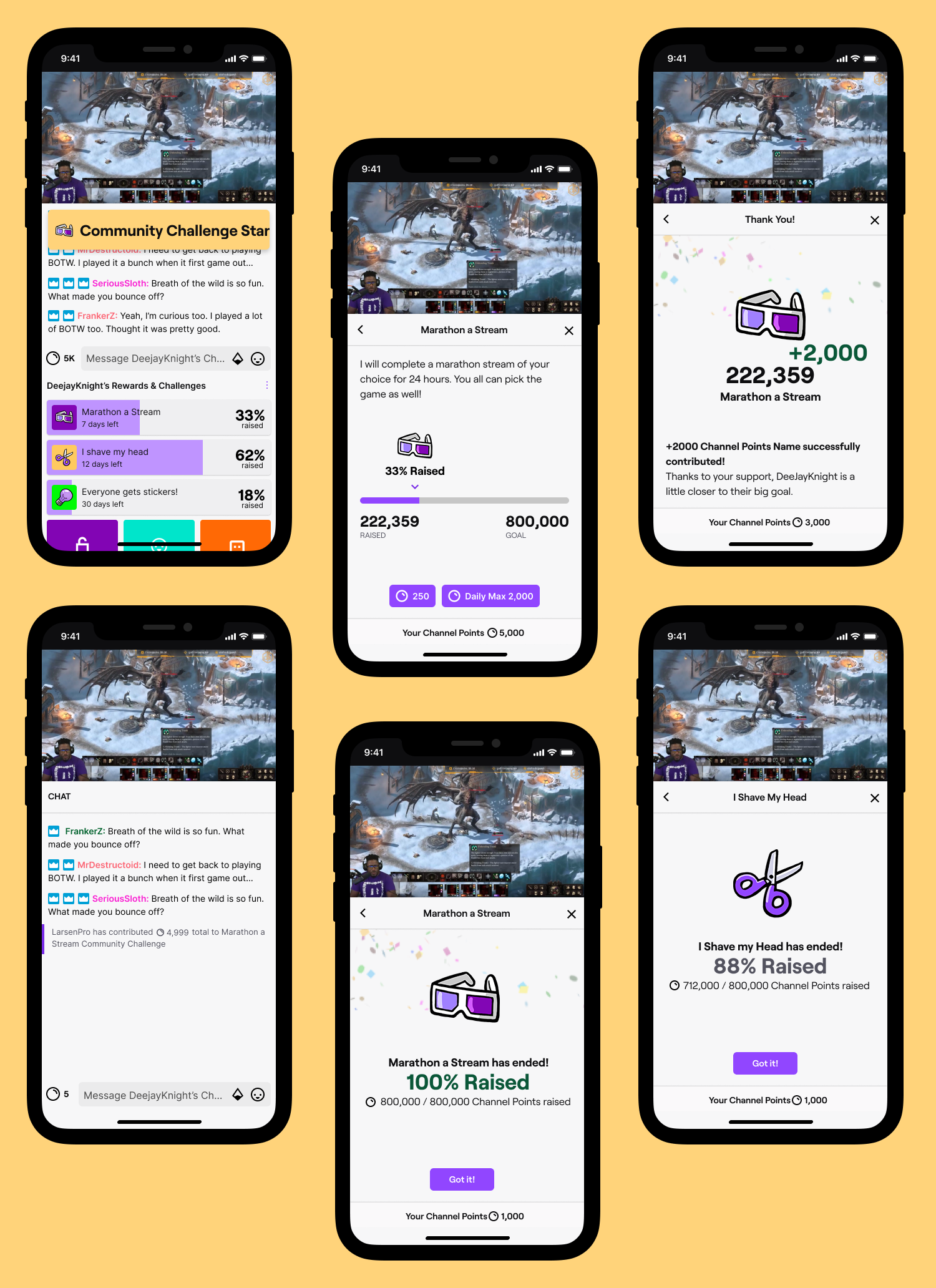 With over 5 million active monthly mobile Twitch users it was important to have parity with iOS and Android. The mobile platform extended another way for our users to enjoy this feature.

Creating Community Challenges was meant to be streamlined and easy to setup. Streamers navigate to their Channel Points rewards and challenges to quickly setup their challenges. 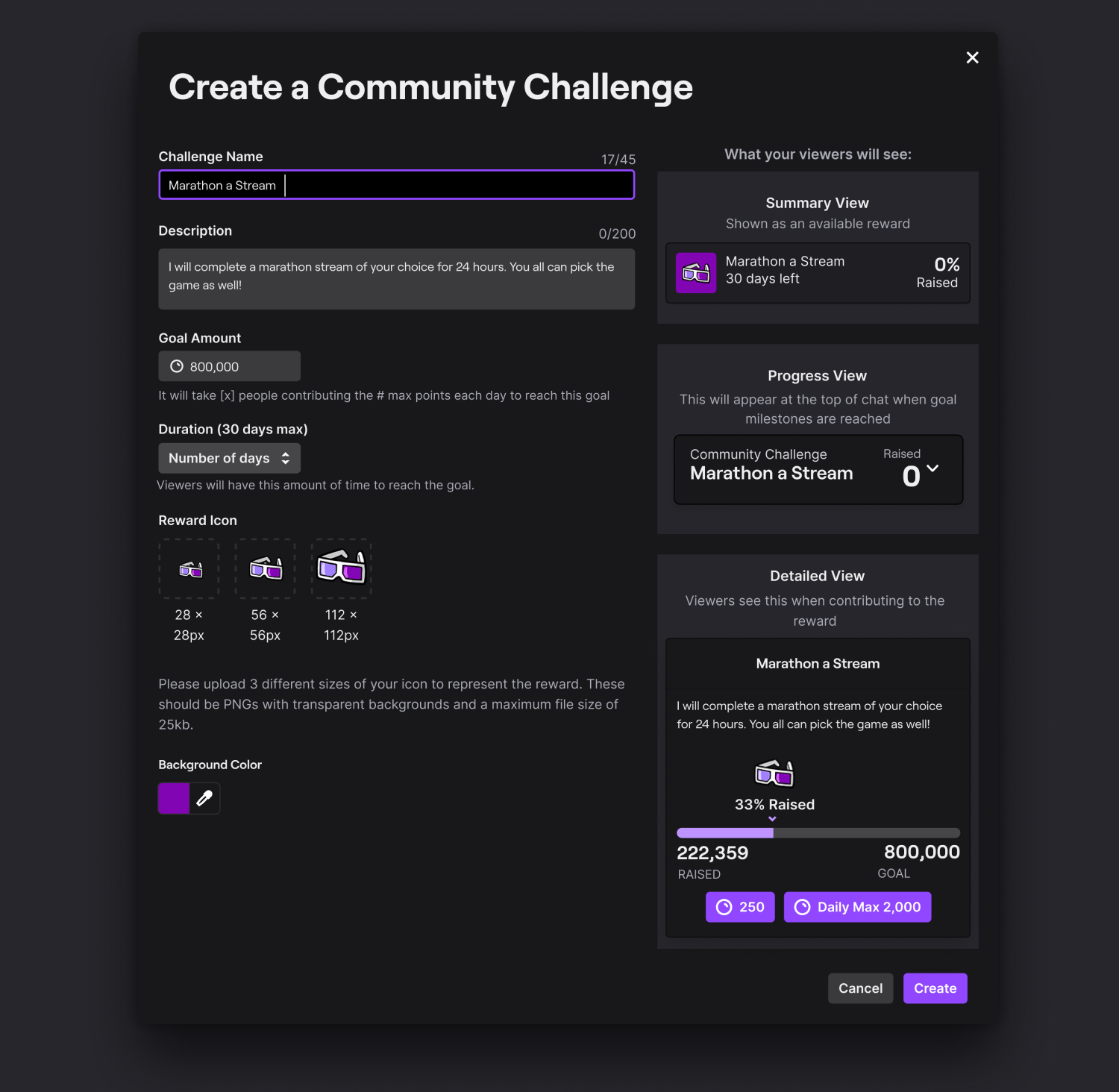 A streamer clicks "Create a Community Challenge" and our shown this modal. The various details of the challenge are entered here. A preview section on the right of the modal allows streamers to a visual aid on how this would appear to their viewers. 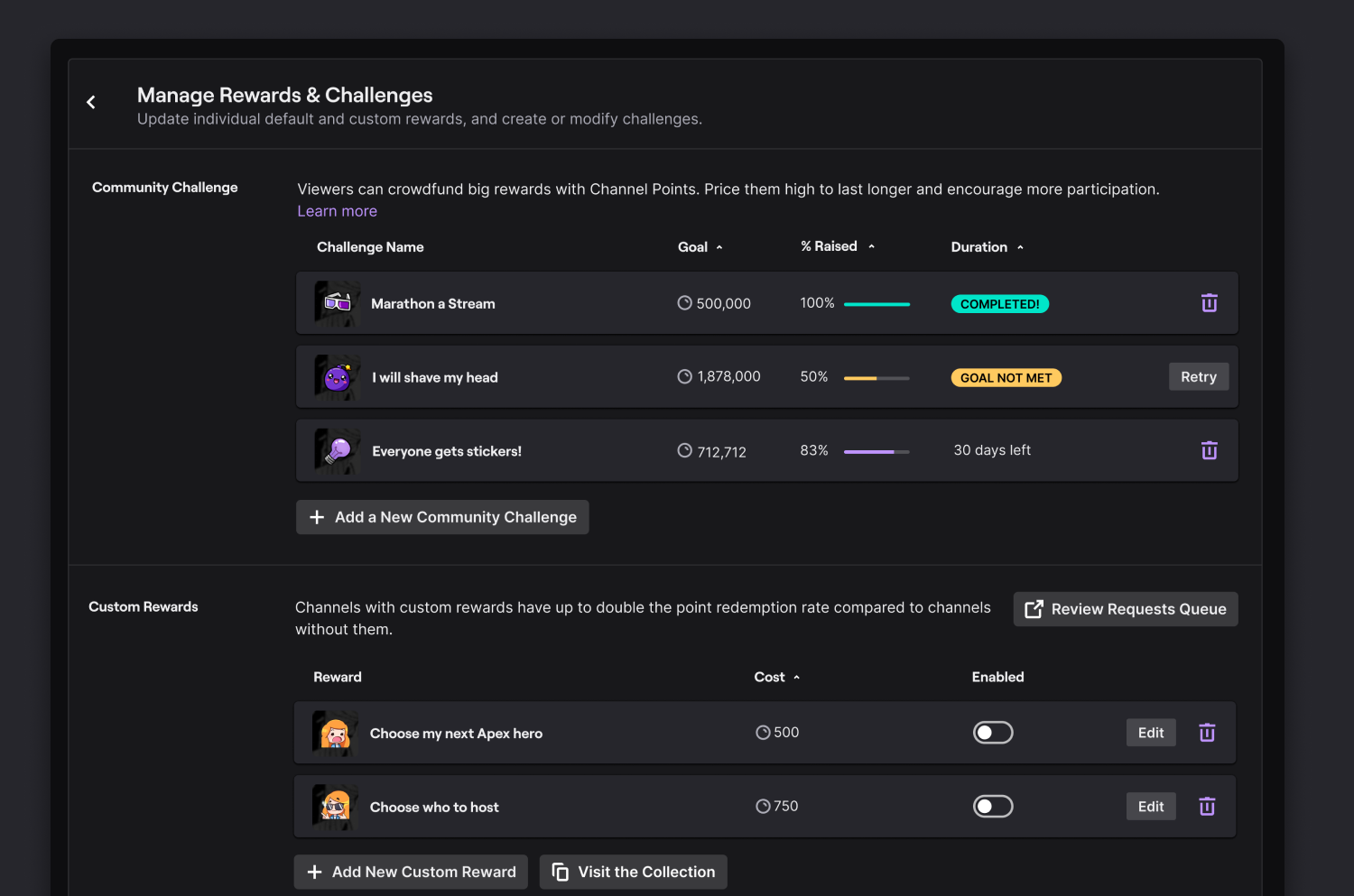 After a challenge is made, it is added to the manage view. Here a streamer can see various details of their Challenges that are running or ended. This view was meant to be allow streamers full control over challenges alongside their other Channel Points rewards.